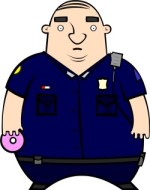 A man was crossing a street with his camera on Christmas, apparently to record some police activity, when he was arrested for refusing to provide identification immediately upon demand.

The Topeka cops approached him as soon as he stepped onto the sidewalk, demanding his identification.

The man, Addison Mikkelson, asked if he needed to present his identification, considering he didn’t appear to have been committing a crime.

But the cops accused him of crossing the street against the crosswalk, which may or may not be true because the cop was referring to the signal after he had already crossed.

“It looks to me like that says ‘no crossing,’” one of the cops said, more than ten seconds after he had crossed, meaning the signal could have easily changed during that time.

Nevertheless, the man said he would provide his identification, but wanted to put his camera down first.

However, the pair of cops began crowding him in typical bully fashion until they arrested him.

“I don’t sit here and wait for you to give me ID when it’s convenient for you,” cop said.

I counted less than 15 seconds from the first time the man said he would provide his identification until they arrested him.

It was clear he was trying to cooperate. But it was also clear they were intent on arresting him from the onset, not because he crossed a barren street against a crosswalk, but because he wanted to document their activities.

For more contacts and emails at the Topeka Police Department, click here.

And to call the Topeka Chamber of Commerce, who might not take too kindly to their city officers unlawfully arresting teenagers participating in Constitutionally protected activities: 785-234-2644.